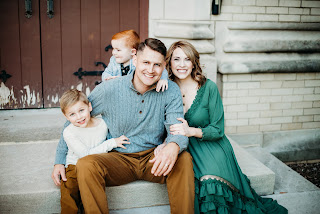 Caitlin (Travis) and I met in 2007 at the first day of orientation @ Malone College when she was there with Allie (Pitt). To this day she says I was cute, but a bit of a tool and didn't stop talking, which (I hope) remains accurate to this day.

We were friends for about a year & a half, dominating the lower half of the intramural bowling standings, and then I hit on her via Facebook comment summer 08. I asked her to a movie at the dollar theater over fall break, which she thought was a big group thing and not a date‚ Movie Sundays led to some flirty 45° room visits, and by senior year we were engaged, she was student teaching at my former elementary school, and I was finishing at Malone playing basketball and as an RA in Devol (I even see some stories involving my tiny little freshmen from that year that found their wife haha)