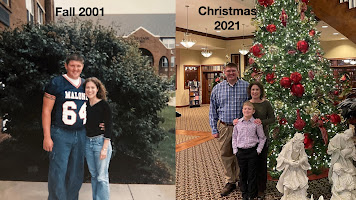 August 27 2001, I met my wife Jaclyn at the day of service during our freshman orientation week. I had been at Malone early for our football two-a-days and choose to serve with one of my teammates, and fellow Malone alumni Josh Robinson, at a senior center. In the van on the way to the senior center, we introduced ourselves to our fellow freshman by saying our names and hometown. I am from Brunswick, Ohio and Jaclyn is from Hinckley, which are neighboring cities. It's funny how often we were in the same places as children but never really crossed paths till we meet that day at Malone. I can still hear my wife say, "I'm Jaclyn and I am from Hinckley which is right next Brunswick." I knew then that she was out of league and she still is.

About two weeks later, after football practice, Jaclyn approached me and ask if I would like to eat dinner with her and her friends. I told her, as long as she didn't mind a bunch of football players joining us. She assured me that would not be an issue. Our first date was the Malone Homecoming dance, we spent our first Valentine's Day dancing in the lobby of the freshman girl's dorms, we had long walks around campus, special dinners that I had arranged with the ladies at the cafeteria, we spent hours in front of the fire in the Barn, and the rest, as they say, is history.

We graduated together from Malone University in 2005 and were married September 2nd 2006. We just celebrated our 15-year wedding anniversary. I am a pastor at Polaris Christian Church in Brunswick and Jaclyn is a nurse for the Cleveland Clinic. We have a 9-year-old son Liam and live in Medina, Ohio. Jaclyn is still very much out of my league but we have been so blessed that our love story started at Malone University.