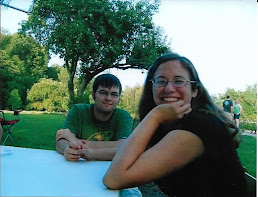 The Sunday right before classes started, my roommate and I were coming down from the dining hall, having discovered it wasn't open yet. Alexander was headed up. We let him know it was closed and he looked so disappointed we offered to let him join us for peanut butter sandwiches in the quad. Instead, he offered to take us to McDonald's. We went, and became friends and later in the year he and I started dating. Almost 15 years from when we first met, he is still my best friend
at 6:08 AM