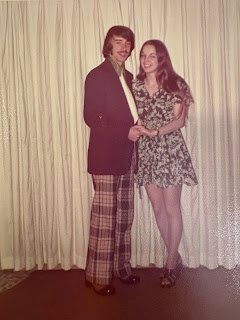 We all know that "the Lord works in mysterious ways." At the age of 18 I would come to realize that what often seems "mysterious" is actually part of His well crafted and perfect plan. I really didn't consider myself a "bad" person. I certainly was undisciplined. However, as my freshman year was drawing to a close at the University of Akron an unseen voice was telling me that it was time for a change - time to move my life in a different direction. There were many negative distractions that had to be cleared away. It had been fun, or so it seemed. The fun was only temporary. I used these distractions to shy away from the emptiness inside. I began to realize at the age of 18 that there had to be more to life. I then did something that was unusual for me - I prayed! I asked Jesus to put my life on a track that He wanted for me. I also asked Him to bring a wonderful young woman into my life. The answer came back very quickly: transfer to Malone College. What?! No way! After arguing with God about affordability and questioning His good judgement I agreed to go for a visit. (God does not lose arguments)! I did forewarn God that even though I would visit I was not going to like it. The Almighty had other plans.

Fast forward to September. I had been at Malone for a week. I was slipping. This wasn't comfortable. I was feeling as though maybe I should return to the University of Akron. I was waiting on the steps at what is now Founder's Hall to enter my class with the legendary Dr. Al Anderson. The class in a nearby room was beginning to exit. I glanced at the door, and there she was! Why was the most beautiful girl in the world here in Canton, Ohio?! You know how in the movies there is a glow around a person and everything else is blurry? It was just like that! For the next few days I made sure that I arrived early just to get a glimpse of "her". I don't know if I believed in love at first sight, but God's voice was urging me to speak to the young lady. Alright, I'm going to do it! No time like the present! I didn't know what I was going to say as I followed her down the hall. Following her a distance of 10 or so feet and clearing my throat I was trying to piece together a conversation starter. Suddenly she stopped and turned around! I panicked! I reversed course and practically ran to Dr. Anderson's class. God had to be shaking His head and rolling His eyes! Well, I blew it big time! For the next few days I turned my head as she was leaving her class. I could never talk to her now. She certainly must think that  I am a stalker or at the very least some kind of a nut! Even though I had given up on a relationship with this young woman God had not. His plans and His ways are perfect. I had messed up Plan A - no problem - God just moved onto Plan B. That Friday I wore a University of Akron shirt to class. When the young lady left her class I was standing off to one side. She walked straight toward me! "Oh no!" I thought. Now she's really going to give me a piece of her mind! She looked into my eyes and smiled. She smiled! She commented on my shirt. We chatted. Three years later Michele and I were married. After 36 wonder years as husband and wife sadly Michele passed away. She is with her Savior! It is because of her influence on my life that I am saved. We will see each other again! She lives on in our two beautiful children and in my heart! None of this would have been possible without Malone College (University). Malone changed my life!              Romans 10:9