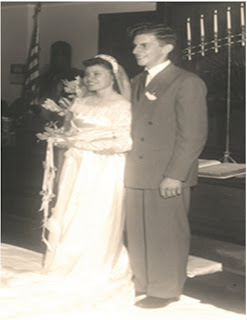 This is not my (Alicia (Morris) Wilkins `83) story, but my parents, John and Phyllis Detweiler Morris. Dad's freshman year started at CBC September 1948.  Mom's started September 1949 after working a year at her high school alma mater. Dad was not only a student but was also considered college staff as he helped with maintenance, painting, etc. One of his jobs was running the dishwasher as students were prohibited by State law. Mom's job was working breakfast every morning. Dad begin to notice her work ethic and being there every day when many of the other girls were not. A friendship began. Their first date was Dad's class picnic May 1950. That Thanksgiving, Dad was stranded with Mom at her parents home in West Liberty due to the Blizzard of 1950. They became engaged the following May but did not tell anyone. When Mom was signing up for her roommates, she put down John Morris. The Dean of Women, Miss Wainright, told her that was not possible. They were married on the hottest August 31 ever in 1951 and held hands until Mom took her last breath on this earth July 21, 2019. Those years in between were filled with serving 7 Friends churches in 4 states, raising 4 children, ministering to needs of those around them. They never retired from serving Jesus. On Mom's last Sunday at Mt Carmel Friends, six weeks before she died, she taught an adult Sunday School class, read a story for the Children's sermon, served in the nursery, and joined Dad in greeting people as they left the service. She was 89 years old. Dad (91) isn't able to be as active as he once was, but he is a faithful prayer warrior.
at 1:05 PM