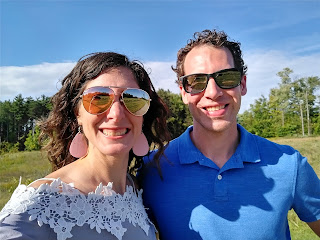 We met in the Fall of 2006 through mutual friends one night while playing sand volleyball. For Tim there was an instant attraction and connection, where as I insisted on being friends for awhile. Tim was busy being student body VP and I was busy being an RA at Devol. We continued our friendship until the Fall of 2007 when I finally agreed to a date. Chris Abrams (the Dean at the time) laughs because senior year Tim was still the student body VP and had to meet with him weekly and I ended up being Chris's CA, thus having weekly meetings with him and for the longest time he had no idea we were dating.  Tim and I spent many a dates walking Malone's campus, attending events, hiking at Quail Hollow and supporting other local Canton establishments. In December of 2008 we met up with some friends at Canton's first Friday despite having graduated and not living in the area. Unbeknownst to me, the only reason Tim was in the area was because he had spent the afternoon with my Dad asking for hi  s permission to propose. Tim proposed on Christmas Eve and we got married in September of 2009. Several people from Malone stood by us in our wedding party, played music during the ceremony, and celebrated with us at our reception. We were even married by Pastor Taylor Williams of Whipple Heights CMA where we attended church during our Malone days. On our 11th wedding anniversary we went back to where it all began; the sand volleyball courts at Malone. We've been married almost 12 1/2 years and have 3 beautiful children. In fact, at the very top and center of our gallery wall in our living room is a sign I made with Malone's coordinates. The rest of the pictures from our life flow down from there. Malone will always hold a special place in our hearts.
at 7:55 AM