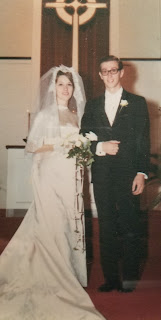 I earned a few extra dollars in college accompanying voice students. I had my full load for the semester (fall, 1966), but Mrs. Bartlett pleaded with me to take one more -- " this sweet girl with an angelic voice who just transferred to Malone and has no one to accompany her." She introduced us, and I agreed. (Was she actually match-making?) It was strictly an employer/employee relationship, of course.......we were both dating other people. But by the end of the semester that began to change as we sometimes did more talking than practicing. The next semester we began dating and got engaged on Valentine's Day, 1968, exactly 54 years ago. So the relationship evolved from transactional to friendship to romance. And it continues to this day.
at 1:19 PM