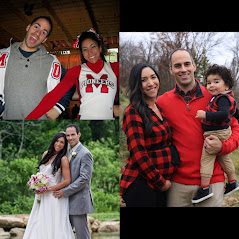 Evan was a member of the basketball team and I was a cheerleader. We met in the first semester of my freshman year and his sophomore year at Malone in 2008. I can still remember the first time I saw him when my teammates and I were leaving the Wellness Center after a workout and peaked in the gym to check out some of the players. My friend mentioned how cute he was and encouraged me to find a way to talk to him. I had a few classes with some of the basketball players and they started dropping hints that I should talk to their friend as well. The first time we finally spoke was pretty comical. I have been told all of my life that I resemble Pocahontas, and one day as I was leaving the cafeteria I passed by his table. He started singing Just Around the Riverbend as I walked by. I simply turned around and replied, Very funny and left. Long story short, after that first, interesting encounter, we had a few, brief run-ins and my friend finally forced me to message him on Facebook to hangout. We have now officially been together for 13 years, happily married for 7 1/2 years, have an almost two year old son named Ezra, and are due with a baby girl on March 4th! We are forever grateful that the Lord brought us together at good ole Malone!
at 9:09 AM