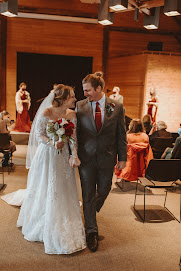 They met in Fall 2017. Shannon had just changed her major to Music as a Junior and Jake was a Freshman Music Production major. Shannon walked into Music Theory on the first day and immediately noticed Jake. She made the first move and introduced herself. During that first class, Professor Jesse Ayers said "Look around at the young men and women sitting by you. You just might end up marrying one of your fellow music theory scholars that's here in this room!" Over the semester, they became best friends, study buddies, and started dating. Fast forward to December 2020, they got married in the Barn, where they spent most of their time together during college. Now, they're happily married with a little orange cat.
at 12:44 PM