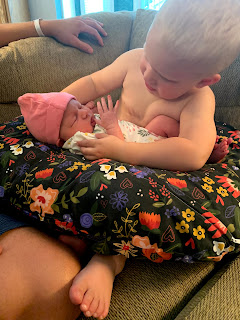 Craig and I met at Malone in the Fall of 2005 as freshman members of the Pioneers Marching Band. Yes, we met at BAND CAMP! He was a boy from Cincinnati and I, a girl from Cleveland, from complete opposite ends of the state and here we were meeting in Canton, Ohio. We learned that we had both been at Malone's Scholar's Day event the year before but never saw each other!

During our first year at MU we hung out with the same core group of friends all five of us were pretty inseparable. Our time together as a group was spent watching movies or playing games in the Barn, going to Late Night in the cafeteria especially on nugget night, playing ping pong in the lounge of Gurney (PGB) or Froggy's, watching American Idol in dorms, or making trips to Taco Bell. Band and chorale were the major social outlets for both of us and being in such frequent company made it easy to grow fond of each other. We began dating the summer after our freshman year at Malone.

We were both education majors (Music Ed & English Education) and heavily involved in Malone's fine arts so we had many opportunities to learn to work together on projects and event¦skills that have translated so well into our marriage and the way we have built lives together. We were the ultimate nerdy band couple, one Drum Major and the other the Band President. If we weren't in class or our dorms, we were likely in the music department of the Johnson Center.

We both graduated with teaching degrees in 2010. Since then we have both earned our Masters degrees, have grown professionally in our roles as teachers, and are now enjoying a new season of life as parents to our son & daughter. We are grateful for our days at Malone. They were undoubtedly some of our best!