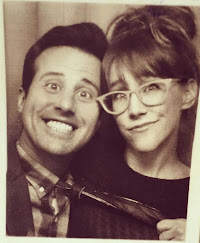 I got involved with the Open Frame Film Festival in 2005 when I made my first short film, "Dispense With The Evidence." Though I'm a professional filmmaker living in Los Angeles now, my casting process back then was more rudimentary. I walked around the cafeteria looking for friends to invite onto the project. I asked my friend Drew Siragusa to be a part of a scene I was filming that night. I didn't want to be rude so I pointed to the guy he was sitting with and said "you can come too!" That guy turned out to be my husband, Jake Thomas. Jake was so hilarious in my film that I decided to make another film with him the next year. Then we moved out to LA together and have been making moves and movies in Hollywood ever since.