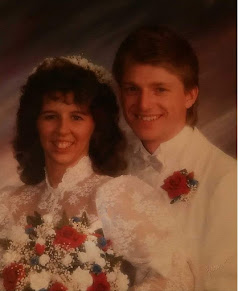 We met in our freshman communications class, and for an interpersonal communication exercise we were randomly matched together. We were given 20 questions to ask of one another, with the 3rd being birthday.

We discovered we have the same exact birthday, same day, same year! (She an hour and a half older.)

We began dating a few months later, and got engaged in then President Gordon Werkema's office! He called Deanna down, as I was already there and said he had been getting a number of concerns about our relationship. He made it clear that it needed to change.

That's when I got on one knee and proposed. We got married after graduation in May of 88, and this year will celebrate our 34th wedding anniversary.