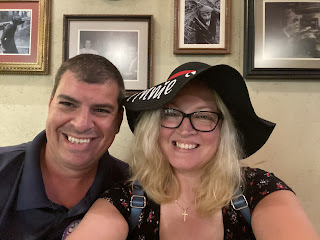 Kevin was a 5th year senior and I was a freshman in 1999. On the first day of full band, I walked into the band room.  Kevin was sitting next to someone and saw me. He turned to the guy next to him saying, the girl I'm going to marry! The guy asked, Who is she? Kevin responded with, I don't know. We met through mutual people and he taught me how to play Euchre.  We became friends and he would take me out to dinner sometimes. He thought I was interested in our mutual friend, Roger Burns. Roger was my best friend and encouraged Kevin yo ask me out. He would write me letters, but I remained oblivious. He was courting me. He asked me to Homecoming and I said yes, but as friends. We traveled to Geneva with the band and found ourselves worried about the other for medical reasons. My asthma and his tendinitis in his knees. After that trip, we went for a walk, laid under the stars and talked. He then asked me to be his girlfriend. I said sure. We went to Homecoming as boyfriend and girlfriend. Within two weeks we were talking about marriage. We both knew. Kevin asked me to marry him on February 29, 2000.   We set the date for July 7, 2001, but had to move the date back, which was a blessing. We were married December 15th, 2001 in the church Kevin was a youth pastor in. The church helped throw us a wedding and it was amazing!  Kevin got a full time job to support us and support me through my schooling.  He did not graduate, but instead took care of us.  In November of 2004 we had our daughter.  I finished my last semester that spring, with a newborn and graduated in May of 2005. We went on to have three more children. All boys, born in October 2006, November 2007, and December 2012. We have been married for 20 years and I am in love with him more than I was the day we were married.
at 6:18 AM