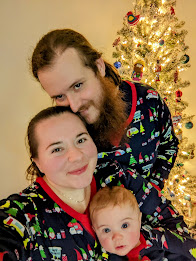 I started at Malone University in the summer of 2011. My now husband, Chris, and I were in Malone's marching band. During band camp he asked me out, to sit with him at lunch, and even just to give me a ride up the hill from the Johnson Center, but I kept denying him. He eventually gave up and started dating someone else, but secretly I was in love with him I just wasn't ready to get into a relationship. Eventually I graduated and moved out of the state. When I moved home a year later I found his profile on Plenty of Fish. I was curious about what he was up to, but I didn't want him to know I looked at his profile. I bit the bullet and looked at his profile and discovered he was still living in the area. A few moments later he sent me a message with his phone number telling me to text him some time. I basically told him to get lost because I didn't want him to know that I still liked him. Five years later we're married with two dogs and a 6 month old son.
at 12:39 PM